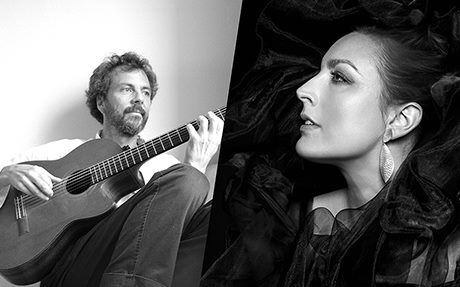 We dare to promise a concert at international top level. With their sublime, technical and musical skills, almost everything is possible for the virtuoso duo. Eeg and Sprague take the audience into their unique, musical playground, where there are neither fences, supervision nor “prohibited” signs.

The two musicians’ cooperation began in 2015 during one of Sinne Eeg’s stays in the United States. Since then, they have performed together several times during Eeg’s musical tours over there, and in the autumn of 2018, they first appeared as a duo on a tour in Denmark.

Peter Sprague has recorded and toured with a number of great jazz icons such as Chick Corea, Dianne Reeves, Sergio Mendes, Hubert Laws and David Benoit. Sprague´s musical inspiration does not come from any particular musical genre. He points out guitarists Pat Metheny and Jimi Hendrix as some of his greatest heroes, so it may not come as a surprise that Sprague has played everything from pop and latin to classical and – of course – jazz.

Sinne Eeg is known and respected throughout the world. With frequent tours and album releases in Denmark, USA, France, China and Japan she has a large and steadily growing fan base. She gets great reviews in eg. Downbeat Magazine and The Guardian and have been honored with many awards in both Denmark and abroad, for example the Ben Webster Prize, Danish Radio Jazz Prize, Album of the Year in Jazz Special, four Danish Music Awards and Queen Ingrid’s Honorary Award.