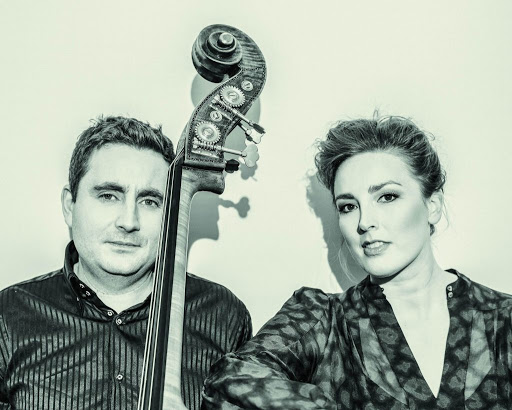 A duo only with vocal and bass pairs Danish jazz singer Sinne Eeg with Danish bassist Thomas Fonnesbæk. Purposely intended to feature Sinne in an open and bare setting and as a departure from her previous lush recordings. Sinne’s voice has a lush timbre that marries perfectly with Fonnesbæk’s warm bass sound.

Eeg and Fonnesbæk listen intensely and inspire each other to take chances. But spontaneity, communication and interpretation is, after all, the essence of jazz. The two are like dancers who are finely tuned and responsive to each other’s every gesture. The results are simply captivating.

As Sinne says, “I always loved singing duo with bass. I’ve done that since my first CD from 2003, and I always do it live in my concerts. It’s just a sound that I like very much. Thomas and I have been working together on and off through the years — he’s just an amazing musician, and he and I communicate very well musically. I feel so comfortable with the bass and voice sound and I also find it so challenging, that I become better every time I sing with him. When you push yourself, that’s where the magic can happen. I really believed that we could do something interesting enough for a whole album, instead of just a feature.”

The duo released their debut album EEG-FONNESBÆK in 2015 which garnered a Danish Music Award (Denmark’s Grammy) for Best Jazz Vocal CD. The number of vocal/bass duo recordings is quite small. EEG-FONNESBÆK stands easily with the best of Sheila Jordan’s duet albums with Harvie S, Steve Swallow, and Cameron Brown. You can hear how their harmonic sensibilities play off each other, creating a rich emotive tapestry and full sound despite the absence of other instrumentation. They take the limitations of the duo format and turn it into an opportunity for greater creative freedom and self-expression that only musicians with great skills and empathy can achieve.

But that’s always been Sinne’s modus operandi. Although she’s firmly rooted in the traditions of the great jazz vocalists, Sinne is an artist who never settles for past modalities. Rather, she prefers to push herself into new territories in her recordings and live performances. She is also a prolific songwriter. Although her other albums featured Sinne’s catchy originals, EEG-FONNESBÆK focuses mostly on standards, Eeg manages to keep the essence of these chestnuts while taking them to new and fresh places that are imbued with her own personality and sensibilities.