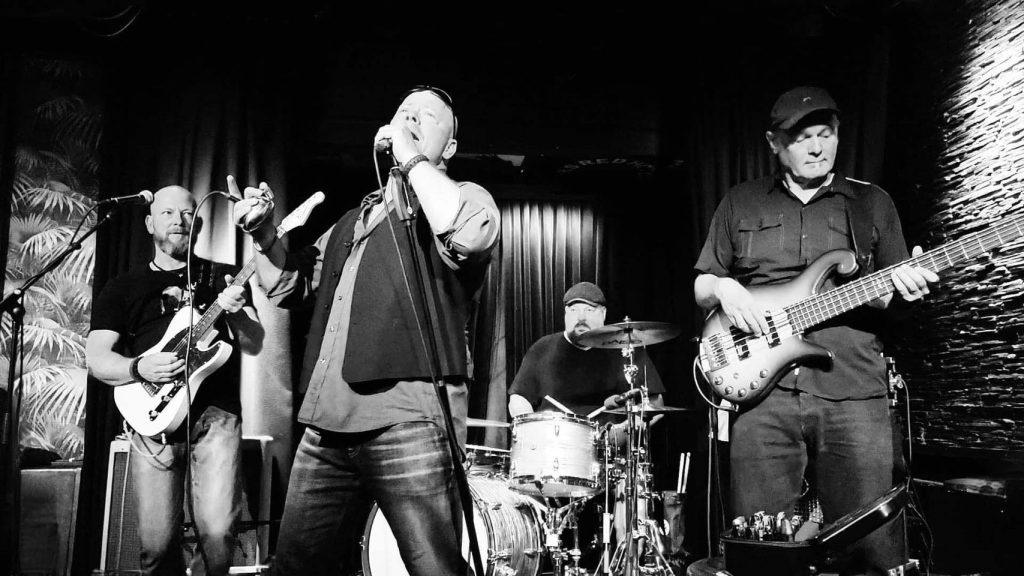 Entré 80,- kun dørsalg
Backbone er historien om et livslangt venskab, brødrekærlighed og musikalske relationer, som går helt tilbage til skoletiden og gennem forskellige bands.
Billetter købes i døren.
Read more:
The blues is back, and it’s here to stay!
BackBone is the story about a lifelong friendship, brotherly love and musical relationships that goes all the way back to schooldays and through several bands.
BackBone has its roots in blues and draw inspiration from Steve Ray Vaughan, B. B. King, and Albert Collins among other artists.
With a nod to the great icons of soul, rock’n’roll and funk, BackBone has created their own sound and interpretation of the genre which finds expression in their repertoire.
As a result, the BackBone live experience is a mixture of the great classics and original tracks. You will be in the company of a band with a charming appearance and a striking drive and groove that will keep you captivated during the entire show. Their joy for playing music and their spirit of blues will reach right into your soul.
BackBone’s DNA
Martin Reinsch: lead vocal / rhythm guitar (prev.: “Slowhand bluesband, “Too bad Jim”)
Thomas Nielsen: lead guitar / KOR (prev.: “Slowhand bluesband”+ VaR)
Morten Midtgård: rhythm guitar / lead vocal (prev.: “Slowhand bluesband”+ VaR)
Kim Dalum: Bass (prev.:”Sweet Soup”,”Jack Jack”,”Blooze band”,”Too Bad Jim”)
Martin Knudsen: Drums (prev.: “Stiff upper lip”,”Deaf Kennedys”,”Exit Maria”)
The band members have lots of experience in the music business as they have played more than thousand gigs – with either this band or earlier on. They have played at Amagerbio, Skanderborg Festival, Mojo, Drop Inn as well as other venues around the country.
BackBone has produced two albums:
”The Blue side” (2012)
”Live fra Svendborg” (2014)
https://www.facebook.com/bluessoulrock/
You can listen to both sessions on Soundcloud:
https://soundcloud.com/…/sets/backbone-live-fra-strandlyst
https://soundcloud.com/kim-dalum-1/sets/backbone
+ Add to Google Calendar+ Add to iCalendar
80DKK