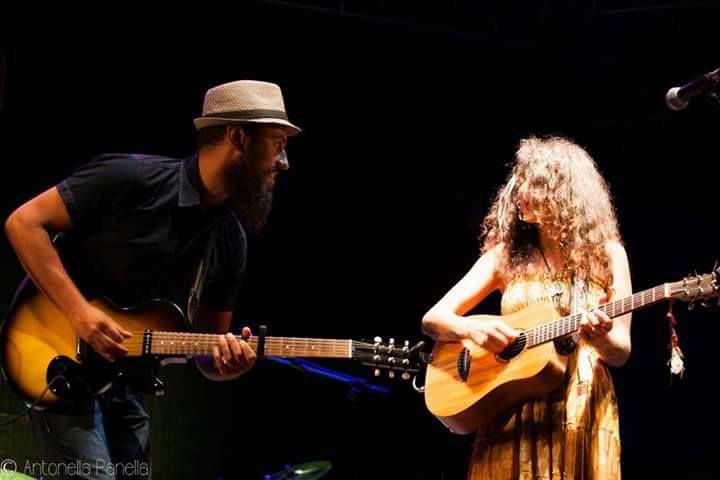 Wakonda:(ITA) Valentina Romano : Voice and Acoustic Guitar Matteo Finizio : Electric Guitar and Cigar box Guitar The musical project comes from Valentina Romano (singer, guitarist, author, composer) e Matteo Finizio (guitarist and arranger); both, permeated since a child by a large one passion for music, have made it the leitmotif of their life, combining art with the profession and working as teachers in different music schools. Wakonda, a term that for the American Indians means “Great Spirit”, comes from the very beginning deep interest that Valentina has for this culture, in which music is considered to be equal to a religion.

The Wakonda born as a Blues-Rock duo, and are inspired by the blues 30 years in the style of Robert Johnson, then influenced by Jimi Hendrix, Neil Young, Mavis Staples, Hank Williams, Seasick Steve … They have a great live experience: over the years, they have performed in clubs in Italy, Switzerland, and have participated in important Blues Festival. In April 2014 their first album of unpublished songs, self-produced, entitled “Pelle a fior of nerves “, with songs in Italian and English, with influences ranging from Blues, to Rock, and to Songwriting. The record has been promoted, as well as in Italy, through a tour of the party in August year, also held in Germany and the Netherlands. In the summer of 2015, the Wakonda were the protagonists of a new Tour, this time in Austria, while summer 2016 saw them bring their music even further, in America. On the way back, the recording of their first official record came at Ugo Poddighe’s UP Studios. Particularity of this record, it was the recording not in acoustic, as it had happened in past, but with a band.